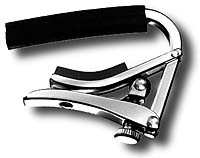 The 'No Capo' column refers to the original chord. 'Capo 1' means a Capo is placed on the first fret, and so on. The chords in each column tell you what the original chord will now be, with a capo on that particular location.

For example, we saw above how the E chord played with a Capo on the 3rd fret is actually a G Major chord. If we look at E in the 'No Capo' column, and follow it to the 'Capo 3' column, we see that it is indeed a G chord.

As you have probably guessed, the capo will change a lot of the rules we have come to learn about the fretboard.

We use cookies on our website. Some of them are essential for the operation of the site, while others help us to improve this site and the user experience (tracking cookies). You can decide for yourself whether you want to allow cookies or not. Please note that if you reject them, you may not be able to use all the functionalities of the site.