Lets start by saying everyone has their own opinions on what to look for when your buying a guitar or bass guitar, they'll hit you with things like ' it has to be a solid top' or it has to have a low action, there's more but I can't be bothered with them right now, basically the three things anyone should take into account when buying a guitar is:

Budget is pretty important because when you start out you don't know how long your going to be doing it; you could play for the rest of your life, or the rest of the week! So all you kids don't expect mum and dad to fork out for some expensive guitar because you need to show the commitment first.

There's also the opinion that you should play the guitar that suits your playing ability, i.e.; beginners should all be playing $100 acoustics and the Santana's should be playing $5000 Paul Reed Smiths...you can play the same stuff on both guitars if you want a expensive guitar as your first, go for gold!

Obviously the more you spend; the better the quality of the instrument. As a general rule, the more expensive the guitar the better the quality of sound, though this is not always true as everyone has a different opinion of sound and in the right handsI've heard $100 guitars sound like a million bucks! So sound is basically the opinion of the buyer.

Now the important issue, COMFORT, there's nothing worse than playing an instrument that is uncomfortable to play. It's going to be a little weird feeling at first but if an instrument continues to cause you pain then its not the one for you, remember we're trying to have fun here! LEFT HANDERS, you will find your going to have a little more trouble than most, as there are a lot more R/H guitars and products available and most L/H guitars are more expensive! The look, as with anything if you don't like the look its hard to fall in love...

Okay, so you know what you want, whether it's a Bass, Acoustic, Classical or Electric guitar there are a few things to look for. With second hand gear generally if its pretty beaten up it will have had a hard life so it's a good idea to get someone who knows a thing or two to have a look. There are a lot of beaten up old guitars that are great to play and worth a lot of money too!

The neck is always something you want to have a close look at, if you sight down the neck of any guitar there should always be a little bow apart from classical guitars nearly all other guitars and basses have a Truss rod built into the neck, this counteracts the tension from the strings. Truss rods are adjustable so most of the time if there is too much concave or convex bow in the neck it can be adjusted; this is one thing that affects the action of a guitar or the height of the strings away from the fret board. A nice low action is preferable in most cases, BUT in the case of a twisted neck or poor fretwork a low action will create a lot of fret buzz. Fret buzz is a rattle caused by the string or strings banging against the frets past where your fingering, sometimes this is also caused by not pressing down on the string hard enough or poor technique. Sight down the neck to check the frets, if they look like there all sitting at different heights then its going to cost a bit to get fixed up.

Bridge height can also affect the action, on electric guitars this can be adjusted fairly easily with the right know-how, acoustics will sometimes be a little more involved. 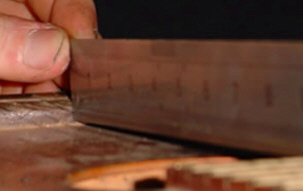 On electrics and basses make sure your adjustable bridges are freely moving too, not seized up by rust or corrosion. Watch out for sinking soundboards on acoustics, this can be a fairly expensive fix and will affect the bridge/action height quite dramatically!

Machine heads, tuners, string tuners...they're all the same thing make sure they turn reasonably smoothly and actually tune the strings up or down! If you hear a 'pinging' sound when tuning its usually the nut pinching the strings, this is a fairly simple fix. If there is a lot of string rattle when you play the strings open then it will usually mean the strings are sitting to low in the nut, once again a fairly easy fix. With acoustics and classicals take a good look over the necks and body to check for cracks in the wood, most things are fixable unless they have been driven over by a Hammer...cracks in the paintwork should ideally be repaired otherwise be careful not to let moisture or dirt get into the wood. 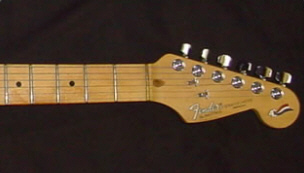 Same with electrics though solid bodies with exposed wood tend not to be bothered so much by dirt and moisture. Electric and bass guitars, you have two types, passive and active electrics, active circuits run on a battery and allow tone/volume boost as well as tone/volume cut. Passive circuits run without power but you can only cut your volume and tone, obviously these will be a lot simpler and cheaper to repair. Active circuits are usually more complicated and expensive to fix but make sure you always check the battery!!!

Test the volume and tone pots to see if they work if they crackle after you have turned them up and down four or five times then chances are they will need replacing, same goes with the jack socket, if it just hums when you put the jack in it will probably need rewiring or replacing. Test the pickup switches, there's a lot of different pickup combinations so find out what they are supposed to be for that particular guitar before you check it out, i.e. Strat five way switch. 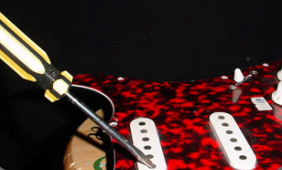 Like anything you buy, its good to get someone's advice on what sort of money the guitar you want is worth though its often only worth what someone is willing pay for it, some guitars maybe worth a fortune to a collector but very little to someone else.

When you do buy the Guitar or Bass of your dreams keep them away from humidity, moisture and extreme changes in temperature, i.e. the back seat of the car in the hot sun. If you have a case, leave it in there whenever you are not playing it and wipe down the strings with a clean dry rag after each time you play it. This'll make your strings last a lot longer. Some finishes don't like certain polishes and cleaners so always check with an expert as to what to clean them with. Servicing by a professional is always a good idea at least once or twice a year.